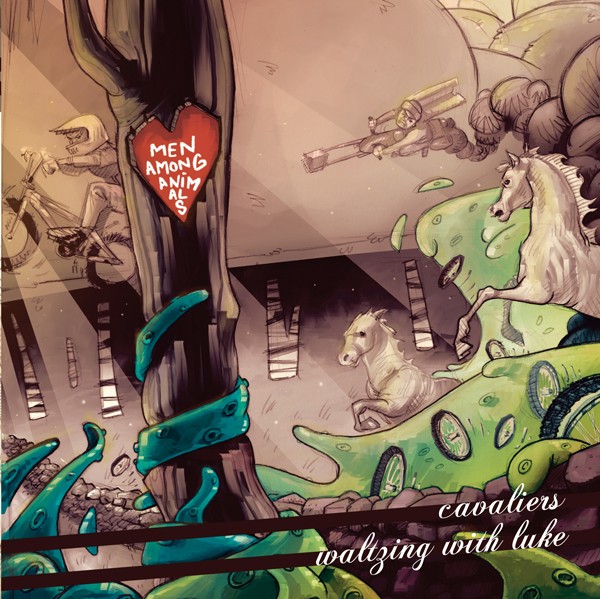 (The vinyl single is only available HERE!)

On a late summer evening in a not so distant past, the sky was roamed by big white cotton clouds and the air was filled with the smell of freshly cut grass. The sun had just begun glimpsing its last red colored light over the flat horizon, lulling the country of Denmark into a sound sleep. A party of four close friends with a love for music, all a bit woozy from drinking wine, sat down and began reflecting upon the nature of good and evil. They soon established that everybody else in the world seemed like animals. No exception! Maybe it was just the wine speaking, maybe it was their young ignorance or maybe it was pure and blunt arrogance. Nevertheless, these four guys felt it was true and they also felt that something had to be done. The world had to be changed! It became clear to them that the main cause of this animal-state stemmed from the fact that people are constantly being exposed to anonymous mind-numbing elevator-, mall- and toilet music (sometimes also on the radio!). In this moment of clarity and passion it seemed quite logical to the four that the exact opposite of elevator music would therefore have the exact opposite effect on people. Luckily our four friends were musicians with a background in all sorts of musical genres and it was easily agreed that the right music for a world-changing mission had to be unpredictable and filled with details, but also sincere and most of all really joyful. Maybe it was just the wine thinking, maybe they were being cock-eyed optimists and maybe, just maybe they couldn’t pull it off. Nevertheless, this is how it came to be that on this particular summer evening our four friends agreed to try and change the world into a friendlier and more thoughtful place with the only but still powerful tool at hand – music. They are known as: Men Among Animals.