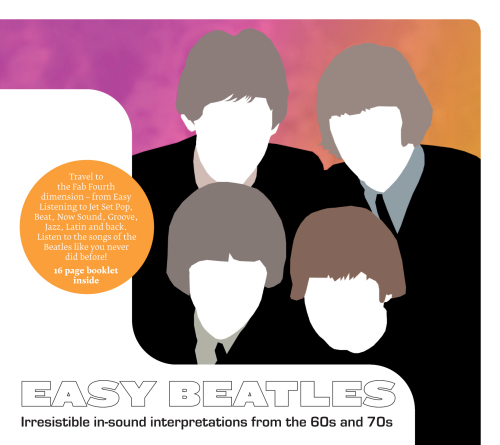 1. The Assembled Multitude: I Want You (She’s So Heavy)
2. Gary McFarland: She Loves You
3. The Harvey Averne Dozen: The Word
4. Nancy Wilson: And I Love Him
5. Earl Grant: A Hard Day’s Night
6. Gershon Kingsley: Paperback Writer
7. Shirley Scott & the Soul Saxes: Get Back
8. Ella Fitzgerald: Savoy Truffle
9. The Sandpipers: Things We Said Today
10. Clarence Wheeler and the Enforcers: Hey Jude
11. Helmut Zacharias: Can’t Buy Me Love
12. Sammy Kaye: Eight Days A Week
13. Nancy Ames: I Feel Fine
14. The Brothers Four: We Can Work It Out
15. Wade Marcus: Something
16. Arif Mardin: Glass Onion
17. Dick Hyman: Love Me Do
18. The Lettermen: I’m Only Sleeping
Medien
keine Inhalte verfügbar
Produktinformationen "Various Artists - Easy Beatles"
Here it comes, the best Beatles covers album ever! Why? Well, listen to this: Now Sound! Jet Set Music! Space Age Pop! Easy Listening! Soul Jazz! Vocal Jazz! Not to mention: Gary McFarland, Gershon Kingsley, The Sandpipers, Ella Fitzgerald, Nancy Wilson, Shirley Scott. All gathered together on one CD, everything composed by the Fab Four. For the first time in history! With detailed and entertaining track by track linernotes, beautifully packaged. Any more questions? Then read on...

Nobody is bigger than The Beatles. They are, and always will be, the Kings of Pop. Many are those who have risen to the challenge and have fallen short, but have, in their attempts to emulate the Fab Four, left us with a rich catalogue of Beatles cover versions. The originals cannot be bettered, but they can be done differently. Countless musicians and bands have transposed The Beatles into styles as diverse as country & western, reggae or even waltzes. When it comes to Beatles interpretations, almost anything goes.

The most prolific period of Beatles remakes coincided with the band’s own active phase. The late Sixties and early Seventies were positively awash with Fab Four facsimiles on the songsheets of popular entertainers and jazz musicians. Some went as far as to record entire albums of Beatles songs. Whilst some turned out to be rather fabulous in their own right, others were unintentionally amusing, but no less fascinating for that. More than a few pearls have been gathering dust in the archives over the years, as Beatles Covermania shows no sign of diminishing. Many such treasures thoroughly deserve to see the light of day once again.

This collection is but a small, initial foray into such territory. Eighteen jewels handpicked from the copious vaults of (primarily) American recordings, covering jet set pop, the Now Sound, easy listening, vocal jazz and soul. Little known startlets like The Assembled Multitude, studio musicians who came together for a single production, rub shoulders with the somewhat more familiar vocalist Nancy Ames, her highest chart postion a less than stellar #89, and the likes of Ella Fitzgerald, a true giant of the vocal jazz scene.

Get ready to enter the FAB FOURTH DIMENSION.