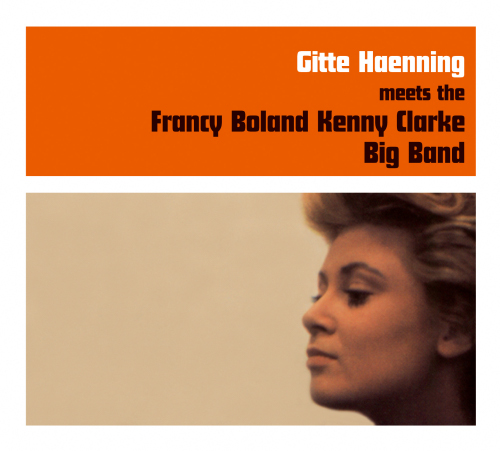 1. My Kinda World
2. A Sack Full Of Dreams
3. A World Without Love
4. Go To Hell
5. Imagination
6. Please Send Me Someone To Love
7. Out Of This World
8. Marriage Is For Old Folks
9. I Love The Life I Live
10. November Girl
Medien
keine Inhalte verfügbar
Produktinformationen "Gitte Haenning - ...Meets The Francy Boland Kenny Clarke Big Band"
The producers of overwhelmingly successful reissues such as Caterina Valente in New York, Connie Francis in New York and Caterina Valente in London have now fished another pearl out of the archives of the big record companies: big band jazz at its best recorded by Gitte Haenning in 1969, the lady who became famous above all for her pop songs (Ich will ‘nen Cowboy als Mann).

We owe these extraordinary recordings – back then released under the title Gitte & The Band – My Kind Of World – to the fact that EMI, the record company Gitte had signed up with back then, wanted to make her compliant with its wishes. In the booklet, Gitte explains what was going on: “I didn’t want to renew my contract as a pop singer. I didn’t want to see and hear myself in that genre anymore. Although I was amazingly successful, I was just more interested in doing other things. Thankfully, EMI suddenly gave me this chance. It was supposed to be something like a gift to me that was to take my mind off things in order to make me feel positive about the conclusion of the record deal.”

At that time, Gitte’s recording engineer also worked for the first-rate big band of the Belgian pianist and arranger Francy Boland and the American drummer Kenny Clarke († 1985), and so they agreed on this unique cooperation within no time. “Words cannot tell how proud I was when I held the record in my hands for the first time”, Gitte recalls.

The recordings include both big band classics and new compositions written by Jimmy Woode, who was bassist in the big band back then and now works with Helge Schneider. This is how Woode describes this exceptional singer in the booklet: “Endowed with an intriguing range, natural ear, and bent for swing, Gitte Haenning has it all! Truly a lady for all seasons.”

The songs are situated in relaxed mainstream, combining solo gems by the instrumentalists with masterly group arrangements: perfectly fitting gala suits for Gitte's voice that at times sounds girlishly innocent, at other times smoky and worldly-wise without ever having any phrasing problems or timbre fluctuations. With her unmistakable vocal timbre, Gitte manages to give new nuances even to the album's only pop melody. John Lennon and Paul McCartney wrote the song A World Without Love for the English singing duo Peter & Gordon in 1964.

The carefully designed digipack CD is the first release by the new record label bureau b founded by reissue experts whose intention was to act in a more flexible way so as to release recordings that, in the eyes of the big record companies, do not offer any significant promise in terms of market potential. bureau b will see to it in the future that more rarities and buried treasures are being released again in an appropriate manner. Coming up next, we will have reissues by Caterina Valente and Hildegard Knef.