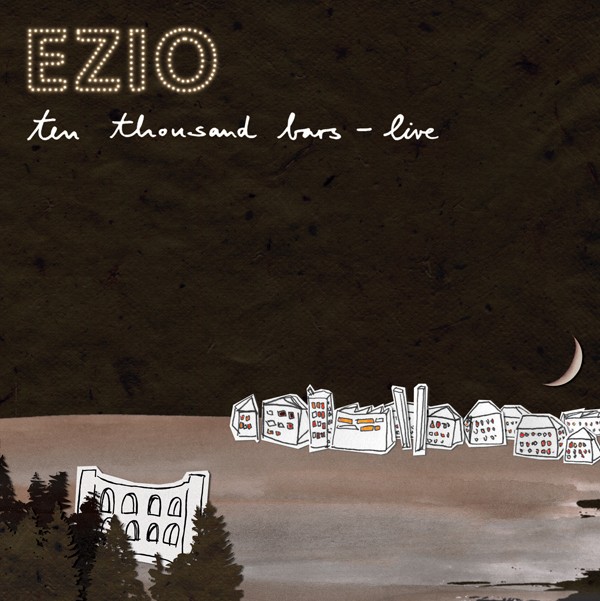 With „Ten Thousand Bars (live)“ we finally have the definitive live album of one of the UK’s most exciting bands: Ezio.
Recorded on a very special night at the Kaisertherme in Trier, Germany (a huge original Roman bath arena) in front of over 1,000 ecstatic fans, „Ten Thousand Bars (live)“ spans the career of Ezio (Lunedei) and Mark „Booga“ Fowell taking in songs from various albums but always keeping the focus and vibe of the outstanding “Ten Thousand Bars” album (2007) intact. The band Lee „The Reverend“ Russell (Guitar, Keyboards), Lidia Cascarino-Clos (Bass) and Alex Reeves (Drums) excel at complementing, not washing over the songs, in a way that makes ‚classic’ Ezio tracks (check “Accordion Girl” or “You’re Strange”) come alive in a whole new context. No frills, no flashy production, just these brilliant songs, better than ever!
So yeah, „Ten Thousand Bars (live)“ is a sort of ‚Best Of’ album. Here is a band captured at what they truly excel in: performing live and playing a selection of songs most other acts would kill for. One of the best songs ever about being out on the road (right up there with Loudon Wainwright’s “Motel Blues” in my book!) “10,000 Bars” sets the mood and tone while “Hotel Motel”, “Shadow Boxers” and the wonderful “Meet Me In The Gods” expand the musical palette. But, all the while you’re always there ... right in the crowd, transfixed. What a night this was!
So here it is, in all its glory, for your aural pleasure wherever you may be, at home, in your car or out walking the dog with your Ipod. If you weren’t there on that warm summer evening in 2007, this is as close as you’ll get, coming in a very close second, indeed.
Release: January 9th 2009